Abstract: Natural habitats are continuing to deteriorate in Europe with an increasing number of wild species which are also seriously threatened. Consequently, a coherent European ecological network (Natura 2000) for conservation of natural habitats and the wild fauna and flora (Council Directive 92/43/EEC) was created. Even so, there is currently no standardized methodology for surveillance and assessment of habitats, a lack that it is particularly problematic for those habitats occupying large areas (heathlands, forests, dunes, wetlands) and which require a great deal of effort to be monitored. In this paper we evaluate the changes affecting the European dry heaths (Nat-2000 4030) from the SCI Os Ancares–O Courel (Galicia, NW Spain) during the past decade. High-resolution aerial imagery analyses and Geographic Information Systems (GIS) were used. Losses of more than 7,000 ha (20.3%) of European dry heaths were computed during the 2003–2011 period in the SCI Os Ancares–O Courel, and also an increase of the degree of fragmentation was demonstrated for this habitat. Paradoxically, major impacts (afforestations, pasturelands) were financed by agri-environmental funds from the EU. Rather than promote biodiversity, these activities have provoked serious damages in this habitat of community interest, which is in complete opposition to the objectives of protection involved in the declaration of the SCI Os Ancares–O Courel. 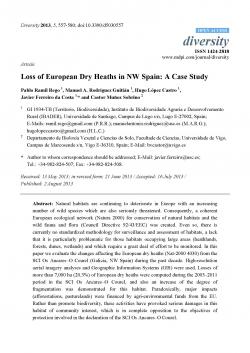