Abstract: This study aims to identify the main mechanisms controlling the hydrochemistry of nine Atlantic bogs. The basic hypotheses are (i) the main functional characteristics of these wetlands (e.g. minerotrophic influence) can be traced and accurately quantified by seasonal hydrochemistry monitoring and (ii) influences (oceanity, pollution) of the surrounding environment at different scales can be statistically outlined. The effect of several landscape variables on bog water chemistry was assessed by combining water analysis with the analysis of spatial data via geographical information system (GIS) tools. The results did not show any significant relationship between hydrochemistry and land use/land cover at the watershed scale, but we found a significant relationship between the Zn concentration and the distance to a nearby power station (located outside the watersheds). A similar link was also established with N–NH4, in this case most likely related to the farming activities. Our results allowed us to identify the period of late summer to early autumn as the most appropriate for detecting minerotrophic traits in South European Atlantic mires. The study showed that anintegrated analysis of hydrochemical data with territorial variables is a useful tool for management purposes in peatlands. 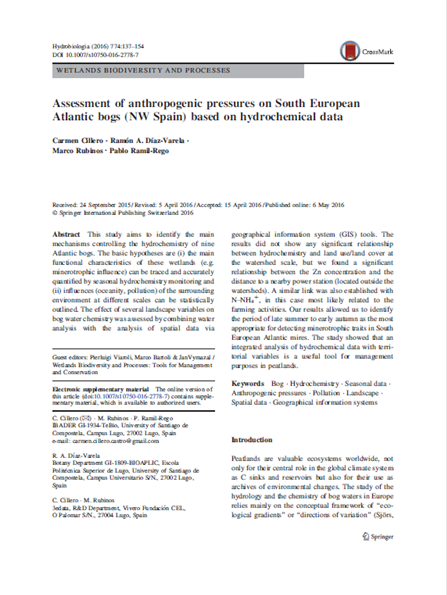