Genetic diversity and structure of Taxus baccata from the Cantabrian-Atlantic area in northern Spain: A guide for conservation and management actions

Abstract: The maintenance of biological diversity at ecosystem, species and intraspecific levels is essential to ensure the survival of forests. The palaeartic yew Taxus baccata is part of a number of threatened forest types with prioritized conservation value in Europe. We investigated the spatial distribution of microsatellite genetic diversity in forty-six T. baccata populations (1,054 trees) spanning the Cantabrian-Atlantic Region (CR) in Northern Spain, framed within a conservation and restoration plan of the species in that region. Different layers of genetic structure were detected, with low structure at a global scale, suggesting historical connectivity, and a complex structure at smaller spatial scales. A low but significant regional genetic variation was also identified associated with biogeographical groups within CR, of potential interest to assist conservation and restoration programs. These genetic differences were reflected on a heterogeneous contribution to the total heterozygosity and allelic richness by the different regions. Data were contextualized within the Iberian Peninsula using previous data in this species (totaling 2,731 trees from 128 populations) after genotype standardization for a common set of seven microsatellites, confirming higher genetic diversity and more homogeneous structure in CR than in central and southeastern Iberian regions. Evidence of geographical structure between eastern (Betic Range, Catalonian Ranges, Pyrenees) and western (Cantabrian Range, Central System Range, Iberian System Range) populations was detected. This study deepens into the spatial distribution of genetic diversity in T. baccata through an intensive survey in CR as a basis for different in situ and ex situ conservation actions in the region aimed to conserve the genetic resources of this species and improve protected yew-associated natural habitats. 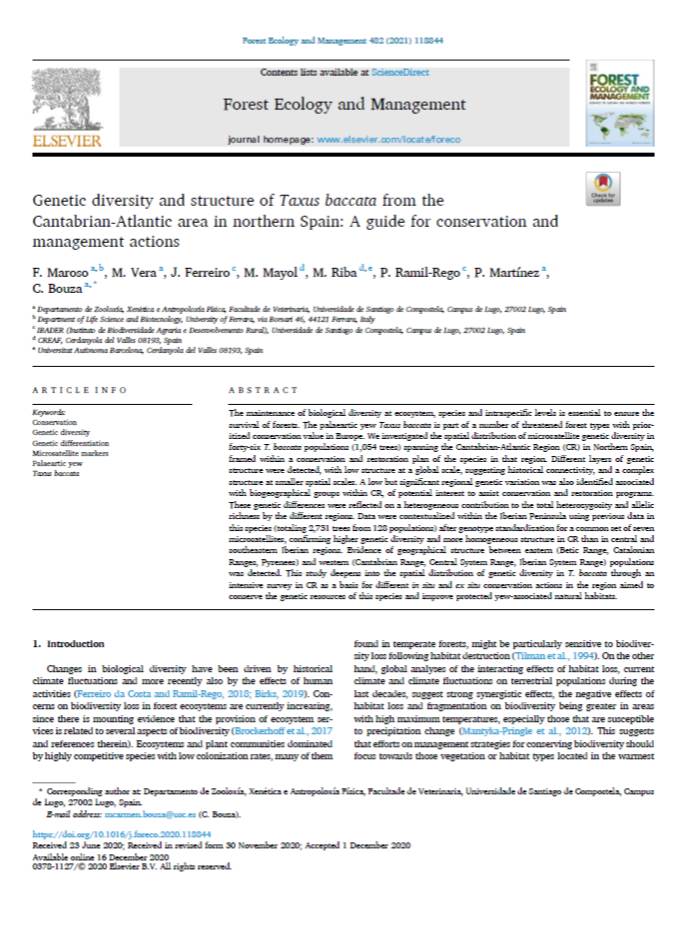